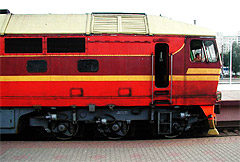 Moscow have reached an agreement with the management of Railways and the Central commuter rail company about the introduction of a unified commuter train ticket. Now people will be able to use one ticket for the trains of several directions.

The new tariff will come into force on 1 November 2011. Currently, when calculating the cost of commuter train tickets, is used the so-called zone system. And the ticket price depends on the number of zones. As of October 19, 2011 the price of one tariff zone is 26 rubles.

New ticket will reduce the cost of travel and improve the quality of services. According to the mayor of Moscow Sergey Sobyanin, as reported by RIA Novosti, the cost of the train ticket may be reduced by half with the introduction of the new unified system.

Optimization of the commuter railways is a part of the Moscow government strategy on reducing the use of personal vehicles on the roads of the capital and increasing the demand for public transport. Traffic jams in Moscow today has become one of the key transport problems and the Moscow City Hall is trying to use a wide range of tools to resolve this difficult situation. In addition to improving suburban passenger transportation system, Moscow Mayor's Office also plans to build about 400 kilometers of roads.

Railway transport in Moscow is also being considered to be introduced across the current Small ring. This project was originally created in 2008. However it was revived only in 2010. According to ITAR-TASS, Moscow City Government wants to use the Small ring of the Moscow Railroad, where until 2016 it plans to build 13 stations. According to the mayor of Moscow, the small ring railroad ticket will not exceed the cost of the subway token. It is expected that within one year Small Ring railroad will serve 250 million passengers.