Moscow for holiday: from the city Lego to tour portal 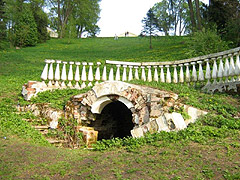 Parks in Moscow will reconstruct also using money of oligarchs.

Summer 2011 was landmark period in Moscow to guide the development of the capital recreation industry. Several global projects to develop tourism in Moscow planned to start in the near future.

The fact that in Moscow could soon start construction of the famous thematic park the Legoland, told RIA Novosti port. Lego park to be built on the outskirts of the aerodrome Tushino. If a final decision is on the project, its development and implementation will be carried out within the capital program "Development of industry, recreation and tourism in 2012-2016 years."

History of Moscow - in the parks at Hodynka and Simonovo.

Besides Tushino, in the above program, several areas of Moscow will become an additional tourist accent. Thus, the plan to opening of a large Hodynka historic park landscape. In Simonovo an architectural complex will be dedicated to the history of the Battle of Kulikov.

Holiday in Moscow parks and forests.

Besides the creation of new tourist attractions the city authorities intend to pay attention and preserve existing ones. The park, "Borisov ponds" will receive from the Moscow government 1 billion rubles for improvement. The modernization of the park was built soccer fields, tennis courts, organized more than 40 zones for a family holiday in Moscow.

Moreover, as informs RIA Novosti, the jurisdiction of the Moscow City Hall will be given 30 thousand hectares of forests that make up the protective forest belt of Moscow. In the surrounding forests of Moscow authorities also plan to organize recreational inhabitants of the capital.

It should be noted that the reconstruction of parks in Moscow is of interest not only in city government, but also for businessmen. On his desire to invest in development of the park, "Feely" $ 100 million in June 2011, informed the president of the Union of Georgians in Russia Mikhail Khubutia. In the territory of the park should appear Filevskaya analog child amusement park Tivoli, the concept of which was developed in Denmark. The intention to invest $ 2 billion in reconstruction CPKiO Gorky voiced by known Russian oligarch Roman Abramovich.

Moscow in the Internet

Tourism in Moscow will soon be presented in the Internet. The Department of Information Technology, Government of Moscow's plan to create a single tourist portal of the capital, with interactive maps, posters of cultural events, and recommendations for the thematic routes. Participation in the filling of the portal will be leading Moscow historians and architects. The domain name of the future of the project is not known yet, but it is already known to the estimated audience of the project. According to ITAR-TASS, it will be 10 thousand people per day.

It should be noted that the Moscow government is trying actively using the internet space right now. So, in July 2011, at full power the project has earned http://pgu.mos.ru/, on which you can make an order for execution of public services online.