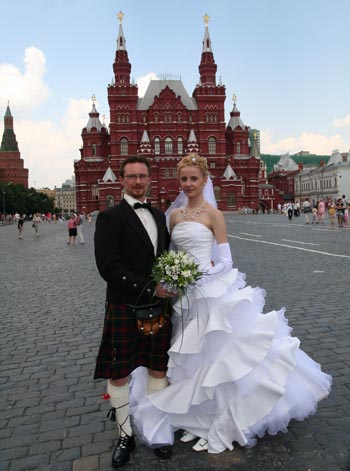 Whether you are a foreigner, who decided to marry one of beautiful Russian girls, a couple from other city of Russia or even a couple of Muscovites - marriage in Moscow is the event that will never be forgotten. I will tell to you a secret: all of my friends who married foreigners did it in Moscow, because in Russia there are less problems with gathering documents for registration of international marriage. Wedding palace 4 is registering such marriages in Moscow.

Right after the registration newly married should certainly go to the centre of Moscow - on the Red Square: to make photos near the Kremlin walls, Saint Basil's Cathedral, The Spasskaya Tower. Near the entrance to the Red Square, if you look attentively under your feet, it is possible to see Kilometre Zero, from which the distance to all the cities of Russia is counted. There is a belief that if you step on this bronze plaque, wish something and then throw a coin over your shoulder, your wish will come true. In case that the coin falls on the ground before it is caught by one of old women crowding nearby. After that a newly-married couple I can put flowers to the Tomb of the Unknown soldier in Alexandrovskiy Garden, take a walk through the garden and on a Manezhnaya Square. In cold wheather you will make quite good photos in GUM.

The Luzhkov bridge (the official name - Tretjakovskiy) over Vodootvodny Canal is a traditional place for carrying the bride over the bridge. Since 2006 year there is a tradition to hang for luck a lock on the banister, sometimes nominal, and to throw keys to the Moskva River. Then, as it is said, nobody will find a key to the heart of your beloved. Later special iron love trees were built for these locks. By the present moment you can hardly find place for your lock on them. In the case of cold weather you can visit the covered and heated Bagrationovsky bridge, the Kiev or Andreevsky bridge.

Lots of young pairs in their wedding-day go to Sparrow Hills (Vorobyevi gori), while from the viewing point you can look at the most beautiful sight of Moscow. Moscow State University is situated nearby. Here a newly-married couple can let pigeons fly from the Sparrow Hills. Not far from here there is a Poklonnaja mountain where it is also possible to let out pigeons, to assign flowers, to be photographed against the Triumphal arch

Kolomenskoye is a magnificent place for making beautiful wedding photos. It is possible to take a walk there, have a rest on one of benches with a view on Moscow River or to ride horses. The landscapes in Tsarino, Arkhangelskoye, Kuskovo are not less popular among newly-married.

It is a good idea to celebrate wedding on board of one of the ships sailing down Moscow River. A dinner and entertainments with a toaster on a covered deck, a disco on a top deck. It is possible just to stay alone with your beloved and watch the waves. So romantic! Can it be ever forgotten?

Choose a route you like, consult the photographer, and be happy!